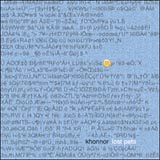 Toward a new electronic romanticism.

One of the most interesting new faces in independent electronic music this past year has been Khonnor (aka Grandma and I, Cactus). At only 16 years of age, his unique style signals a new dialect in the language of electronic music -- one built from an engaging confrontation of nostalgic themes and artful digital interruptions.

The music in Khonnor's world is a private sort, evocative and transporting. A strange music that makes you feel old for the first time and new in the most familiar way.

With three EPs on the venerable Monotonik label, an mp3/cd release as I, Cactus with 8bitpeoples, and a forthcoming release on upstart label Type, we're very pleased to offer these six new tracks -- certainly among his most beautiful work to date.

Here is an important musical talent equally at home in the past and present, making sweet vignettes with just the right amount of light.

6 - I Was Everything You Wanted Until I Quit

"I was everything..." is the best track in this release.

Reviewer: hrx3000 - favoritefavoritefavoritefavoritefavorite - October 30, 2005
Subject: amazing
absolutely awesome I think Khonnor style is unlike anyone else in electronica very different so whatever toho said is absurd I think toho is mad because he is bitter for some reason notice its the only review hes writen. i dont like it as much as his I cactus stuff but this is amazing still amazing textures and lo fi sounds

Reviewer: Toho - favorite - September 12, 2005
Subject: Unoriginal. Derivative.
If I said that Khonnor's music was creative, radical, thought-provoking, or at all like his press blurb, I'd be lying. Honestly, the sound is nothing new. If living in your parents' basement at 16 (or 17) and churning out electronic sounds for an exclusive audience of collectors is remarkable in any sense, I'd have been a superstar years ago. Fortunately for me, I knew better than to tout my awful noise as anything more than just that. But it was fun making noise while it lasted. Thankfully, I never intended to make anything of it.

Feigning emotions to a crackly IDM rhythm comes off as careless, and exaggerating one's importance is just irresponsible. The music has been done before, and better. It's over. It's all over. A number of great musicians were formed from IDM, glitch, clickyclack music, or whatever you want to call it this month. They contributed an interesting sound to music in general. But what of Khonnor? If it weren't for a handful of nearsighted, credulous internet music critics, he/it would have been buried in the sea of mediocre IDM that continues to pour from suburban basements.

Pass.
Reviewer: Soulissimo - favoritefavoritefavoritefavorite - March 11, 2004
Subject: Recommended
So young and so talented. Phew!
Lots of beauty here, sometimes a bit grating, but mostly highly indivudual moving pieces. Nice combination of natural and processed sounds. Cantelopps is especially beautiful. IÂm curious about how this guy will develop his music.
Tres simpatico to give songs of this quality away for free.

Please Do Something
Netlabels